My global and local farm-to-table adventures

Maja’s cheese with seaweed, other with carrot juice

Maja Beaujouan holding a wheel of her cheese 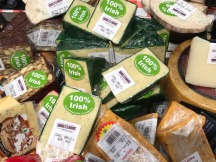 Before going to Ireland, the iconic foods that I thought about were corned beef and cabbage, and the history of the Great Famine of 1845-1852 when potato crops failed. I hadn’t really thought about Irish cheese. After tasting many, I think their cheese is in that pot of gold at the end of the Irish rainbow.

It’s no wonder that Irish people use kelly green as “their” color: the hillsides are brilliant in that hue. The lush grasses make perfect pasture for cows. And those cows produce milk for a growing array of artisan Irish cheeses. The local foods movement has been apparent in all seven countries I’ve visited this trip, and Ireland is no exception. Promoting Irish cheese to Irish people, supermarkets proudly attach green stickers so customers see what’s local. I tried a couple of faves, both made on family farms: pungent, washed-rind Gubbeen and creamy Cashel Blue. Like other Irish cheeses, these pair well with Guinness and other beers.

A recent Irish study found that people who ate a lot of cheese had a higher intake of saturated fat compared to those who didn’t eat as much cheese, and yet there was no difference in their LDL (bad) cholesterol level. Their results are consistent with studies in the US – which is great news for those of us who love cheese.

In Dingle, on the western coast of Ireland near the scenic Ring of Kerry, I met artisan cheesemaker Maja Beaujouan. She started making cheese as a teenager in her native Germany, and honed her skills as she visited the Alps and Italy. When her mom moved to Ireland, she did, too, adapting her cheesemaking style using local ingredients and organic, grass-fed cow’s milk. Her cheese Dilliskus is laced with dried seaweed, which was traditionally foraged along the nearby coastline. Folks in Dingle told me that they eat sea vegetables to this day, and their favorites are sea spaghetti and several varieties of sea lettuces. Maja sells her hand-crafted cheese along with international cheeses at her Little Cheese Shop. When I bought some, the gal at the counter asked, “Is this for your hamper?” No, I hadn’t brought my laundry. Ah, a hamper is a picnic basket!

Just a couple of days ago I returned to the US and made a beeline to Whole Foods to see which Irish cheeses are available in my neck of the woods. I happily left with a taste of Ireland: Old Irish Creamery Cheddar with Guinness folded into the curds, Cashel Blue to top a salad, and cans of Guinness draught stout. I didn’t dance a jig through the parking lot but I sure felt like it!